Today I went digging through my hard drive for a research paper I wrote in policy school that used structural equations modeling to analyze the 2004 United States presidential election.  Sadly, it seems I lost the final version and only have a rough draft.  I did, however, find another research paper on population changes in Wayne and Oakland counties (roughly, Detroit and its wealthier suburbs.) 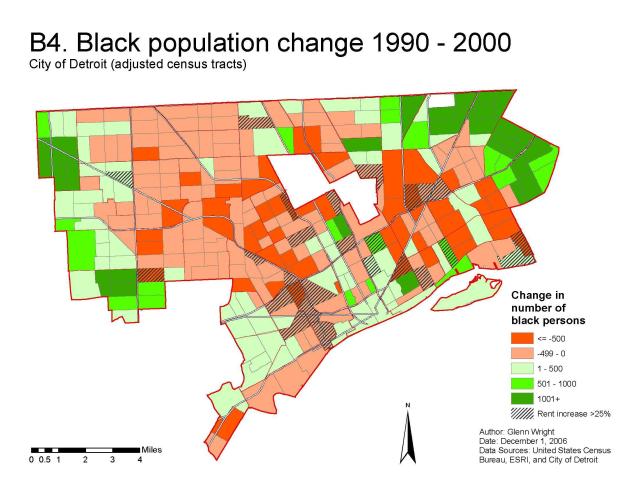 Some mixed, sort-of tooting my own horn: I independently discovered one of the most important urban trends in the United States – the dispersal of poor, urban blacks to inner ring suburbs, which in many ways laid the ground for the recent conflict in Ferguson.  Of course, by that time, the professionals had already discovered it.

I also found, in retrospect, absolutely no evidence for gentrification in Detroit from 1990-2000; at the time I worded my conclusion a bit more weakly, probably because no one I talked to wanted to hear this conclusion.  Fortunately, I’m coming to care less what others think in my old age.  Also in retrospect, the most likely cause of the changes I observed is the Third Great Migration.

I guess I’ll take a stab at explaining the lost structural equations modeling paper as well.

I’ve talked in the past about some of the subjective choices one must make when running a multiple regression model – specifically, that one must be careful not to include variables that are “too good.”  For example, the “feeling thermometer for Hillary Clinton” question steamrolls every over variable when you’re predicting whether someone voted for Clinton or Sanders in the Democratic primary, even though it really doesn’t tell you anything interesting.  Structural equations modeling helps sort out the interrelationships among variables in a more complex way than simple multiple regression: 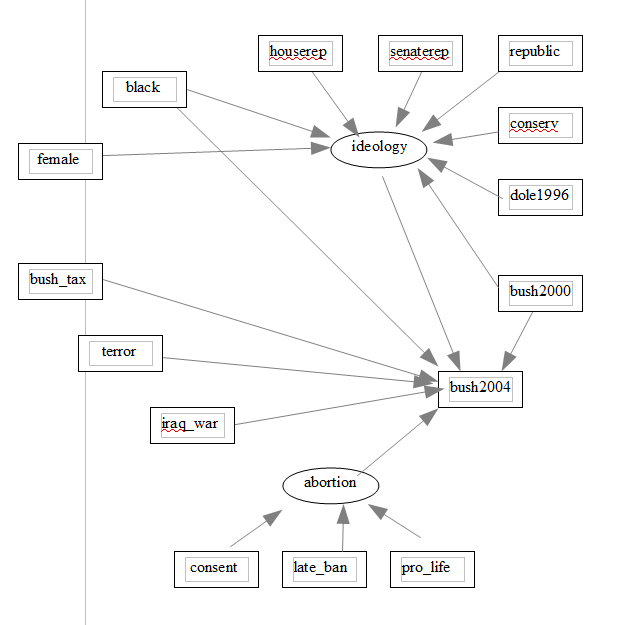 These were my conclusions, at least in the rough draft:

The central research question for this model is which factors influenced presidential voting choices in 2004. The model finds that the standardized estimates of the effects of taxes, terrorism, and Iraq were significant roughly similar (0.15, 0.23, 0.18), whereas abortion had a lower estimated effect (0.04) that was not statistically significant. The factor for political ideology had an estimated effect of 0.19 on presidential voting, and it seems logical to interpret this as the effect of all other political issues, not including the four measured individually. Presidential voting in 2000 had an estimated effect of 0.22 on presidential voting in 2004; because the common factor in the two elections was Bush’s candidacy, this effect may represent the effect of respondents’ personal like or dislike of Bush. Thus, the central findings of the model could be roughly summarized by saying that taxes, terrorism, Iraq, general political ideology, and traits specific to Bush had roughly equal effects on presidential voting in 2004, whereas abortion made no difference. These findings reinforce some of the media narratives – that terrorism and the Iraq War were important issues in the election – and cast doubt upon others – that abortion was a major issue and that traditionally important economic issues such as taxes did not matter much.

A second interesting finding of the model concerns the power of the “political ideology” factor. The high loadings and estimated effects of the factor indicate that the respondents, who are intended to be representative of American voters, tend to hold consistently “liberal” or “conservative” views across a wide range of issues, and to vote for candidates from the major party consistent with their views. These findings are consistent with a “polarized” nation only in a narrow sense, in that there seems to be consistent agreement among voters about what the two poles are and which side of the center they are on.

This does, however, mean that voters are divided by a gaping ideological chasm, or that Jim Hightower is correct to say, “There’s nothing in the middle of the road but yellow lines and armadillos.” The statistical test of that claim is much simpler – one can simply look at the distribution of political identification and opinion scales on various issues, or the distribution of presidential votes across states. Addressing that issue is not one of the goals of this paper; suffice it to say that every research who has examined American public opinion in recent years has found the same center-heavy bell curve as has prevailed in the past, rather than the bipolar distribution the Washington Post article implies.

A third finding of the model, tentative because of the small number of blacks in the sample, is that blacks base their voting and political identification on different factors than whites. Interestingly, despite the overwhelming tendency of blacks to vote for Democrat candidates, blacks also tend to identify themselves as less conservative and less liberal – closer to the center of the spectrum – than whites do. In any case, this paper does not address that issue.

(Why did I say “Democrat candidates” in the final paragraph?  Today that would be a marker for being a Republican, although I don’t recall whether that was a thing at the time…)